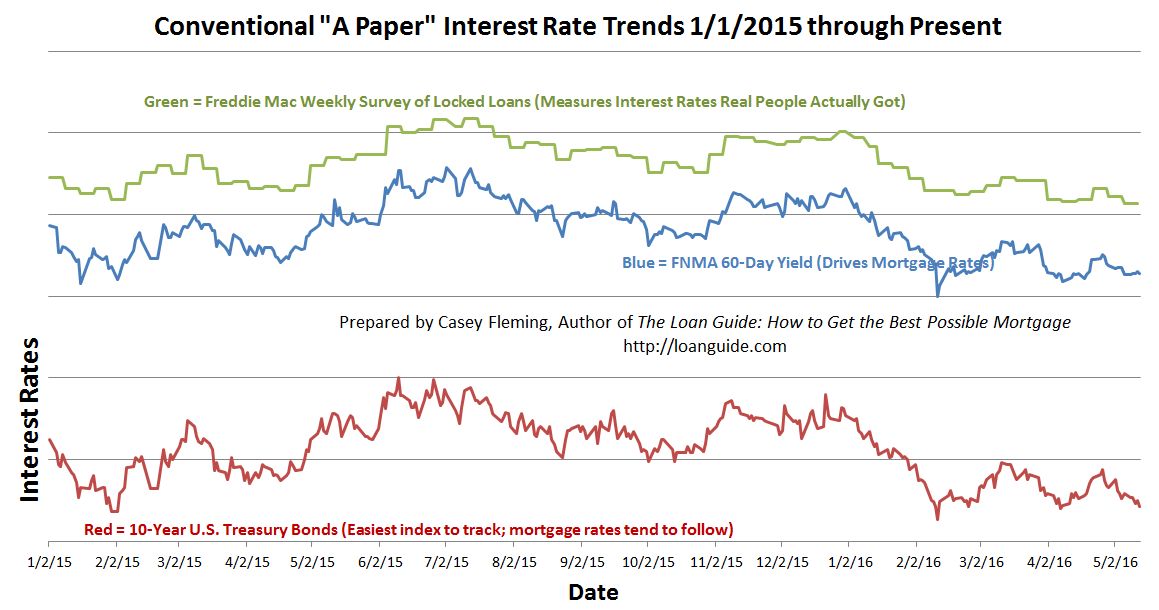 Interest Rates Slide Down Gently to a New Low

Last week I wrote that interest rates were likely to move mostly in response to the stock market. The stock market idled most of the week, moving down unsteadily Wednesday and Friday. Money moved into Treasury bonds driving yields down gently (see red line in the chart immediately below) but mortgage-backed securities did not follow. (See blue line below.)

I also wrote that rates at the retail level would probably continue to fall into this week, and that indeed happened. (See green line in chart above.) The move was small, but we are now in territory not seen for over two years. We may have had downward spikes in wholesale rates that went lower than this (January and February of last year, and February of this year) but retail rates haven’t been this low for a long time.

The margin is finally starting to come down, but can rates go down any further?

As you know, I also track the difference between wholesale and retail rates (basically the margin that lenders are charging) because I noticed that it went up at the beginning of the year. You can see that this week the margin (blue line in the chart above) came down sharply, since the wholesale rate as measured by the Fannie Mae 60-day yield held steady, but retail rates came down. The margin is still above the range it held most of last year, but it’s now getting back to being close. Last week I wrote “If (the falling margin) lasts, interest rates that you are offered could drop even if the yields on the Treasuries and Mortgage-Backed Securities does not fall.” This appears to be what happened.

What’s on the calendar for this coming week?

Monday brings the Empire State Index, a measure of manufacturing activity in New York State. This report can move markets if the number comes in unexpectedly high or low. Expectations are low for this report, so if it surprises it is more likely to surprise on the upside than the downside, and is thus more likely to give the stock market a boost than it is to drag it down. Most likely, however, it will come in where expected and be neutral to market conditions, so Monday should be quiet (based solely on economic reports.)

Tuesday, however, brings a slew of important economic reports, including CPI, Core CPI, Housing Starts, Industrial Production and Capacity Utilization. All of these could be market-movers. They are expected to show mild inflation and moderate economic growth. A surprise to the downside is more likely than up, and if that happens the stock market could weaken, which would be great for rates.

We are also now more than halfway between meetings for the Board of Governors of the Federal Reserve, and the minutes from the meeting of April 27 will be released on Wednesday. The minutes are very unlikely to contain surprises and thus unlikely to move markets. Moving forward, investors will start looking for clues about what the Feds might do when they next meet June 14th and 15th, and the markets could get a little jumpy.

Once again this week the yields on 10-year bonds are likely to move in unison with stocks as money moves between the two investment classes. If the 10-year bond holds steady or improves much, mortgage-backed securities have to follow, and retail rates would hesitate, but follow gently if the drop in the MBS yield is strong enough.

Look for stability on Monday, some turmoil on Tuesday, and clearer direction the rest of the week.

And remember, with retail rates as low as they have been in a couple of years, they don’t have very much more they can fall.