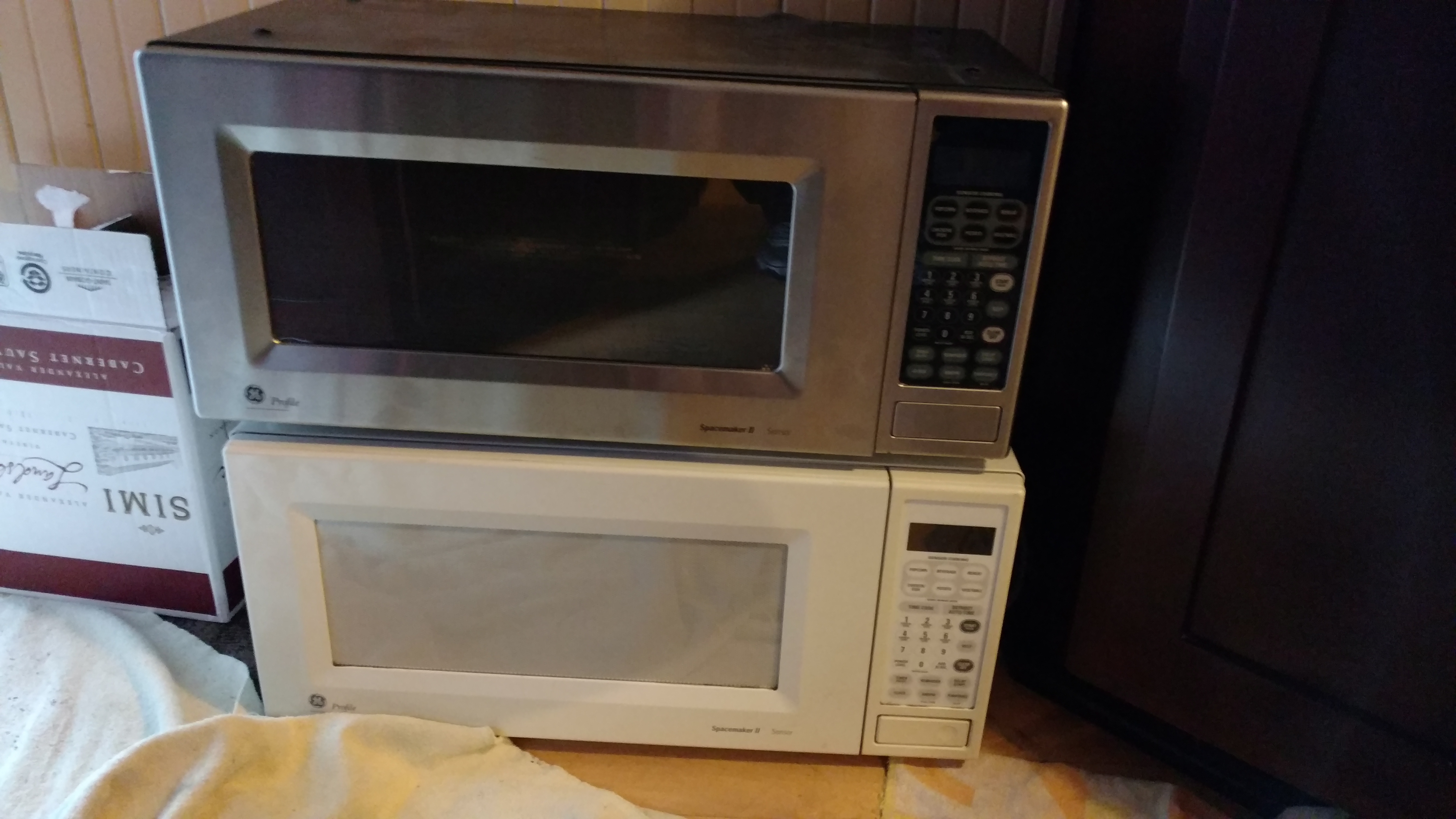 The Last GE Appliance I Will Ever Buy

About 10 years ago I remodeled my kitchen.  I have a 1926 Craftsman bungalow that I wanted to remodel to period.  My goal was a kitchen that looked like it could have been built in 1926, except of course for a few modern conveniences, like a microwave for instance.

In looking over options, I discovered the GE Profile Spacemaker microwave; a very small unit that would fit in a custom-made upper cabinet.  It would not be completely invisible, but it would appear as much as possible to be built in.  There was even an installation kit available that mounted the unit inside the cabinet cleanly and provided airflow.  The microwave was expensive, but it suited my needs and GE of course used to be a great company.  I sprang for it.

Everything was great until…about 6 years after installation the unit stopped heating.  Researching options, a service call from GE was going to cost more than many brand new units.  Being creative, I looked on Craigslist and, sure enough, found a used one of exactly the same model at only $40.  Perfect.  Until…

Fast forward another 4 years and that unit stopped working.  Fair enough, I didn’t pay much for it.  Now I decided I would spring for the service call, but thought I would get creative.  Can you service two units with one call?  Yes.  Excellent.  I can fix both units and have a back up.

The GE guy (I won’t call him a technician) comes out.  He’s young, looks a little uncertain, but he had some tools and a laptop.  He’s trained, right?  He looks at both units, consults a trouble-shooting software program on the computer, and tells me that one unit needs a new magneto, and the other needs a new power supply.  The cost for each?  About $575. Each.  Did I mention each?

Yikes!  I asked for an itemized estimate to see where the costs were buried, and sure enough about half the cost was in the parts.  That’s right – the parts cost more than a new microwave.  The problem is, there isn’t a new microwave that fits the mounting unit of the old one, or – importantly – the custom-built cabinet.  Not good.

Idea time!  Can we take the magneto out of the one unit and put it in the other?  I’m happy to pay for labor.  Then I’ll have one working unit and one unit someone can use for spare parts.  The GE guy hems and haws, then says they can’t warranty that.  I told him I didn’t care about the warranty – they always break after the warranty period ends anyway.  He calls his boss, hangs up and says they won’t do it.

At this point I was not a happy customer.  I told him that I thought the policy sucked, and was clearly only meant to extract money from customers.  I explained that I was old school; in the past when things broke, companies sent out technicians who could actually test parts and fix only what needed to be fixed.  You know, someone with an electrical meter and a soldering gun.  Someone who simply consulted a software program and then wanted to switch out parts that cost more than the microwave were not technicians, just parts-changers.

I’m afraid I hurt his feelings, because at that point he made a comment to the effect of “You know, I could just walk out and not even put the microwave back in the cupboard.”  I assured him that my anger was directed at the company and their policy, not him, but insisted I had a valid complaint.  After all, both microwaves were useless at this point.

I told him that since I didn’t have much choice I would fix the original one but not the other, and went back to my home office to work.  However, I looked on Craigslist and sure enough, there was another used one, this time for $50.  I heard him wrapping up so I went out to ask how long it would take to order the part.  He replied that he was not going to order the part.  He decided that he didn’t want to do the work, and that I wasn’t going to get my microwave fixed.  What?

When I asked him what he would do if it were his microwave in the same situation, he replied he would do as I suggested, but that’s because he could – he had the skill to change the parts.  He added something to the effect that “…all I wanted to do was save money.”  Well, duh.

So, an hourly wage junior service guy made a decision for all of GE that I wasn’t going to get my microwave fixed because his feelings were hurt.  I was ticked, but on the other hand there’s no way he could charge me the $118 service call fee, so I saved that money.

I called the guy selling his unit on Craigslist, and went and bought it.  It works fine and is in great shape.  Obviously, it won’t last but a few years, since these units break down quickly, but I figure I’m at least $500 ahead, have a working microwave now instead of in a week or two, and I don’t have to deal with an overly-sensitive guy who thinks it’s awful that I want to save money.

But, GE, you used to be such a great company.  Jack Welch, are you reading this?  Do you still have any pull at GE?  Because the company you built is now selling appliances that only last a few years, sending “technicians” out that don’t know how to use an electrical meter, and charging more for replacement parts (that may or may not need to be replaced) than for the original appliance.

News for you, GE.  You have competitors.  Lots of them.  New ones springing up every year.  It used to be if I had a choice I had a strong preference for buying American, and in particular the GE brand.  No more, and that’s too bad.

This article represents the opinion of Casey Fleming, and not necessarily that of Financial Help Desk.  This article is copyrighted and may not be reproduced in whole or in part without written permission.